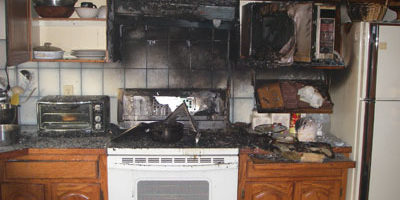 The number one source of home fires is the kitchen. Taking some precautions can make a large impact on preventing kitchen fires. Below are some suggestions from the National Fire Protection Association (NFPA).

-Cooking oil is often necessary for frying, but is also one of the leading causes of stovetop fires. Heat oil slowly to the desired temperature, and add food slowly to oil to reduce the chance of splatter. Keep a well-fitting lid next to the pan, incase flames appear, you can put the lid on to snuff them quickly.

-Never leave the kitchen unattended. Especially when broiling, boiling or frying. Fires can quickly become out of control when left unattended.

-It would seem that roasting, baking and simmering would run less of a risk of fire, as they take much longer. But since they do take longer, they can easily be forgotten. Set a timer so you don’t forget to check on your food. Make sure to keep wooden utensils, oven mitts, dish towels, etc away from any heat source.

-Cooking breakfast or dinner could mean you are cooking while tired. Make sure to stay alert and avoid distractions.

-There is no definitive answer as to whether you should try to fight a fire or leave immediately and closing the door while calling for help. Take the safest route and call 911 as soon as possible. Make sure to get everyone out of the room.

-It is reported by NFPA that 55% of people injured in home fires from 2005-2009 sustained injuries due to trying to fight the fire themselves. 1 out of 4 fires from 2007-2011 was caused by fat or grease, and 1/3 injuries were reported from these fires.

Some simple steps can be used to prevent fires, but they aren’t always avoidable. In the event of a fire, we can ensure that your home is back to it’s pre-loss state quickly and safely. The key is to start the restoration as quickly as possible as to reduce secondary damage.